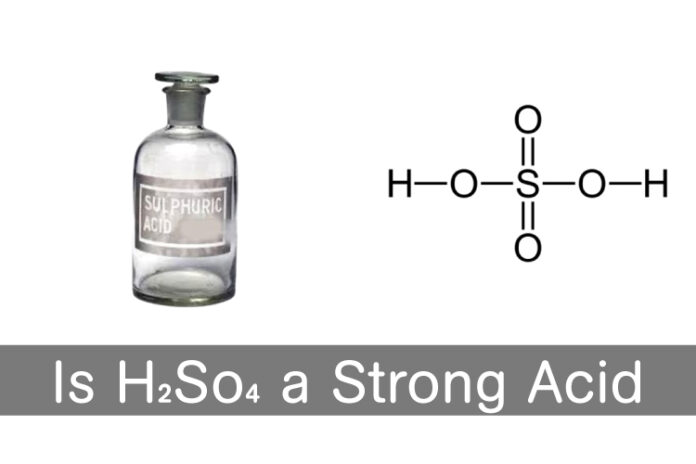 It’s an extremely useful substance and can be found in many different industries, including making paper, glass, soap, textiles, dyes, and plastics. It has many uses, such as removing paint from metal, dissolving stone, and purifying water.

One thing sulfuric acid can’t do is dissolve itself. This is because it becomes a very strong acid when it mixes with water, which means that if you drop sulfuric acid into water, it will form the ionized compounds H3O+ and HSO4−. This compound is also known as “hydronium” and “sulfate”.

There are many physical properties of Sulfuric acid (H2SO4) in which some of the properties are given below:

There are many chemical properties of Sulfuric acid (H2SO4) in which some of the main properties are given below:

sulfuric acid(H2SO4) is a very common acid in the world. It’s an extremely useful substance and can be found in many different industries. some of the uses of sulfuric acid are given below:

What is the atomicity of H2SO4?

Is H2SO4 harmful to humans?

Sulfuric acid is a very strong chemical that should be handled with extreme care. It is corrosive to the skin, eyes, and lungs. It can cause severe burns to the skin and eyes. If swallowed, it can burn holes in the stomach or esophagus. Inhaling sulfuric acid fumes or mist may irritate air passages of the nose, throat, and lungs causing coughing and wheezing.

You can watch How Sulphuric Acid Reacts with different things by clicking here.

What is the specific gravity of sulfuric acid?

Why is H2SO4 a strong acid?

How many atoms are in H2SO4?

Is sulfuric acid used in drugs?

Yes, Sulfuric acid is used in drugs like Pentosan polysulfate.

How many ions are in H2SO4?

There are two ions in H2SO4. One is a sulfate ion (anion) and the second is a hydrogen ion(cation).

Do you need a book store in your neighbourhood?

How Would You Address A Wide Range Of Skills And Abilities...

Do you need a book store in your neighbourhood?

How to learn English with songs

A Great Nursery is Not at All Difficult to Find

How To Know If Your Source Is Reliable

How to Choose the Best Preschool for Your Child